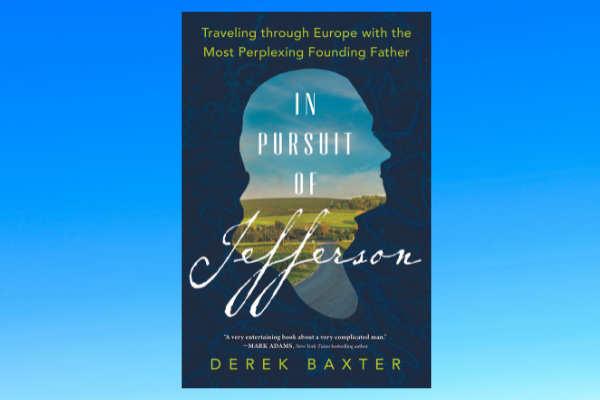 Adults
Please note that you are looking at an event that has already taken place.

Thomas Jefferson. You think you know his story—president, author of the Declaration of the Independence—and yet, a lifelong slave owner. Is there anything more in this day and age that could be said about him? The answer is a resounding: yes.

Darien Library and The Mather Homestead welcome history lover and author, Derek Baxter. He shares his story from his new book, In Pursuit of Jefferson, about how he stumbled across a document that sheds an entirely new and personal light on our famous founding father: Thomas Jefferson, the traveler—and quasi-travel guide writer.

Register for In Pursuit of Jefferson

In the 1780s, Thomas Jefferson was a broken man. Reeling from the loss of his wife and humiliated by political scandal, he needed to remake himself. To do that, he took time away from his job as ambassador to France to travel through Europe, seeing and learning as much as he could. When two young countrymen asked him for advice on where to go on their own journey, he wrote them a five thousand-word letter he entitled Hints to Americans Travelling in Europe, instructing them where to go, what to do, and how to bring knowledge from their travels back to newborn America.

More than two hundred years later, Baxter used this mini-guide to embark on a grand tour of his own, following Jefferson’s advice through six countries and absorbing countless lessons while recovering from his own personal crisis. Jefferson's "Hints" letter sent Baxter into the middle of a fish auction and the top of a cathedral, to Italian rice farms, English landscape gardens, and Dutch canals, from french street protests to a most unusual marathon that took place through the vineyards of Bordeaux.

Yet, along the way, what Baxter discovers isn't always what Jefferson had in mind--as he comes to understand the man better, he realizes Jefferson could never escape the fact that the work of those he had enslaved lay behind all his travels and projects.

In Pursuit of Jefferson is at once a personal story of a life-changing trip across Europe and profound personal journey as well as an unflinching look at one of America’s most controversial founding fathers. In Pursuit of Jefferson asks us to reexamine how we see our Founding Fathers as well as ourselves. Written with immersive historical detail, a hilarious voice, and a boundless heart, Baxter explores how we can be better at moving forward only by first looking back.

Derek Baxter graduated from the University of Virginia with a degree in history. He is currently an attorney who lives in Virginia. After years of research, Derek made nine separate trips abroad on Jefferson's trail. You can follow his adventures with Thomas Jefferson at jeffersontravels.com.

Books will be available for purchase at Barrett Bookstore.