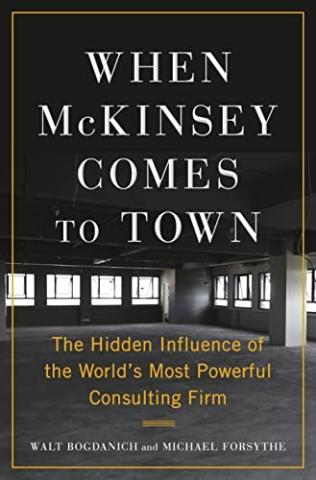 Adults
Please note that you are looking at an event that has already taken place.
Registration for this event is no longer open.

Darien Library and Barrett Bookstore welcome authors Walt Bogdanich and Michael Forsythe in conversation about their new book, When McKinsey Comes to Town:  The Hidden Influence of the World's Most Powerful Consulting Firm.

McKinsey & Company is one of the most prestigious consulting companies in the world, earning billions of dollars in fees from major corporations and governments who turn to them to maximize their profits and enhance efficiency. Their statement of values asserts their role is to make the world a better place, and their reputation for excellence and discretion attracts top talent from universities around the world. But what do they actually do? Listen to prize-winning investigative journalists Walt Bogdanich and Michael Forsythe as they describe details from their book, and learn exactly what they have uncovered:  a company sharply at odds with its public image.

Walt Bogdanich is an investigative reporter for The New York Times. He has been awarded three Pulitzer Prizes for his investigative journalism. He previously produced stories for 60 Minutes, ABC News and The Wall Street Journal in New York and Washington. He has a B.A. in political science from the University of Wisconsin and a master’s degree in journalism from Ohio State University. He lives in Port Washington, New York.

Michael Forsythe is also an investigative reporter for The New York Times. Previously, he was part of a team that won the George Polk Award in 2013 at Bloomberg. Mr. Forsythe is a veteran of the U.S. Navy. He has a B.A. in international economics from Georgetown University and a master’s degree in East Asian Studies from Harvard University. He lives in New York City.

Copies of When McKinsey Comes to Town:  The Hidden Influence of the World's Most Powerful Consulting Firm, will be available for purchase at the event.